There is not much application overlap between the two pump designs; more often there are assumptions made about the Hydra-Cell design being similar to AODDs simply because both use diaphragms to move the process liquid. The designs are compared below to help customers better understand positive displacement pump designs to assist them with selecting the most appropriate pump design for their specific application.

An AODD pump is pneumatically driven, almost always via compressed air. The quality of the compressed air is important because contaminants (particles, compressor oil, water) accelerate component wear and may directly reduce performance. AODD pump IOM manuals suggest dry air filtered to 5m referred to as “instrument quality air”. Thus, the first aspect to consider for an AODD pump application is do you have sufficient compressed air that is both relatively dry and clean?

The volume of compressed air required is noted by the manufacturer per pump model and both the desired flow rate and maximum operating pressure determine the cubic feet per minute (CFM) required. Sometimes you can increase efficiency by using an oversized pump.

Hydra-Cell pumps do not require compressed air and can operate within a pressure range of 30 to 5,000 PSIG depending upon the pump model. Any application overlap between the two different pump designs happens within that 30-125 PSI range and sometimes customers figure-out their process would benefit from higher pressures than their AODD pumps or air compressors are capable of providing.

AODD and Hydra-Cell pumps operate on a similar principle which uses a diaphragm to increase and decrease the volume of a pump chamber with the flow path controlled from inlet to outlet using one way check valves.

This is perhaps the number one differentiation between AODDs and Hydra-Cell pumps: their diaphragm actuation method.

The mid stroke happens when the air is relieved behind one diaphragm and directed to the other, during this time there is a brief interruption in flow which causes pulsation. The pulsation is particularly noticeable because the frequency of the diaphragm stroke is limited by the air valves, liquid ball/check valves and relatively long stroke of the piston; the maximum stroke frequency for a 1” 37 GPM AODD pump might be 8 pulses per second and usually it is much less.

Their design inherently contributes to mechanical fatigue of the diaphragm, resulting in rupture; such damage is accelerated at higher discharge pressures. Diaphragm ruptures equate to fugitive emissions (leakage via the air vent). 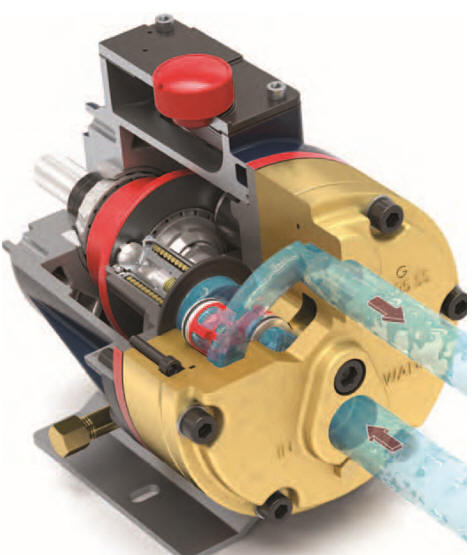 Diaphragms used in Hydra-Cell pumps are moved by a column of oil; oil is non-compressible and thus acts just as a solid piston to move the diaphragm. The (patented) benefit of using oil as your driving piston is that you can control the mechanical stress across the diaphragm to within a maximum 2 DPSI. That means that the diaphragm never sees more than 2 PSI of differential stress whether you are operating at 30 or 1,000 PSIG.

Place a Post-It or business card between your hands and press together really hard – did you damage or rip the paper? Don’t worry, it doesn’t mean you are weak, rather you equalized the pressure on each side of that thin paper, so it remained stress free and undamaged. This is essentially what Hydra-Cells hydraulically balanced diaphragm design does, ensures that diaphragms lead a stress-free life – we should all be so lucky!

While each design uses diaphragms to displace the liquid, all but one Hydra-Cell pump design has 3 to 5 diaphragms; with a 3 diaphragm design the pulsation frequency is very high compared to AODD pumps at 115 pulses per second. Hydra-Cells operate using a shorter stoke at much higher frequency’s resulting in a pulsation that is inconsequential – liquid filled pressure gauge pointers sit still whereas they jump around with AODD pumps.

It is difficult to damage a Hydra-Cell diaphragm, failure modes are over-pressurization, chemical/temperature incompatibility and foreign material lodged in the pump chamber (it could even be something like ice if the liquid is allowed to freeze within the pump head.) Damaged diaphragms tend to enable the synthetic motor oil within the hydraulic end to leak into the process fluid. Especially if the inlet pressure is high, some process liquid may enter the hydraulic end. Special oils for food contact and other chemically sensitive applications are available to mitigate contamination concerns. There are also devices which monitor the oil level for quicker detection of a damaged diaphragm. 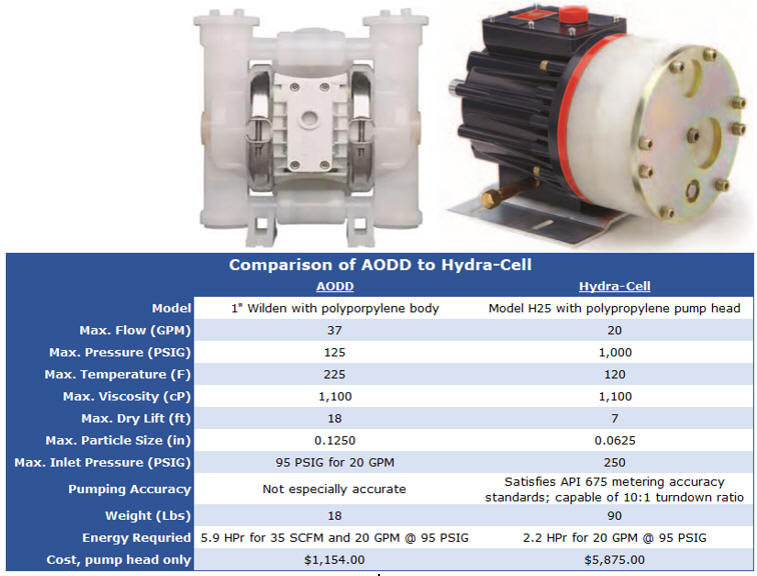 Hydra-Cell pumps cost significantly more than AODD pumps, they are about 5-7 times more expensive due to several factors:

Hydra-Cell pumps are also vastly more complex; they have many additional parts and require oil changes every few months of use.

It might be cost effective to replace an AODD pump with a Hydra-Cell pump if the AODD pumps are frequently replaced or if the process itself benefits from its aforementioned differential characteristics.

AODD pumps excel at liquid transfer applications because they typically require lower pressures and flow rate linearity isn’t much of a concern. In addition, their dry suction lift capabilities are much higher than a comparable sized Hydra-Cell pump. AODD pumps are also a good design for hazardous environments because they do not require explosion-proof motors and electrical enclosures.

The most common types of pumps Hydra-Cell’s “compete” with are piston and plunger style pumps; the pumping action, capabilities and cost are comparable however the sealless Hydra-Cell design contributes to increased reliability and costs significantly less to maintain. Seals used for piston and plunger pumps require filtration within the range of 25-150m whereas Hydra-Cell’s only require a 420-3175m fineness of filtration, making them more suitable for reclaimed or otherwise abrasive liquid applications.